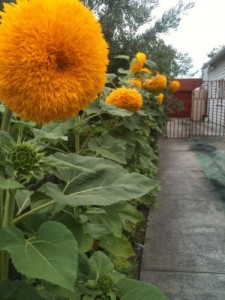 Stately 6- to 7-foot plants produce 10 inch blooms!
The FULL-SIZE version of the popular dwarf Sunflower, Teddy Bear!
A Giant Sunflower with closed eyes! These massive 10-inch double blooms are stuffed with tiny, densely-packed petals of richest golden-yellow, all the way to the center! The effect is of unbelievable frilly petal power on imposing 6- to 7-foot plants.

Giant Sungold is the full-size version of one of the most beloved dwarf Sunflowers ever, the charming 3-foot Teddy Bear. The two look great together in a border or bed, and make super arrangements. Giant Sungold is long-lasting in the garden or vase.

Sunflowers are the kings of the natural sunny summer garden, attracting butterflies and birds. They’re wonderfully easy to grow–just direct-sow the large seeds after all danger of frost. Not picky about soil type, they need direct sun.

Thin the plants to 2 to 4 feet apart so that they can show off their foliage a bit as they grow.

For fresh flowers, cut the stems 1½-2 feet in length and at an angle of 45 degrees. Strip off any leaves that will fall below the water level; place the stems in water immediately. For the longest vase life, recut the stems and replace the water every three days. To save the seeds for eating, first cover the heads with a protective fabric covering such as cheesecloth to discourage the birds and squirrels. As the heads ripen, they will drop their petals; the back of the head will turn from green to brown, and the seeds will develop a hard coating. Cut the heads, leaving several inches of stem.
Hang them to dry in a protected, well ventilated area. Remove the seeds by gently rubbing the dried heads. Store the seeds in an airtight container.

Sunflowers were named for their habit of turning their faces to the sun. At the beginning of their development they exhibit heliotropism, or following the sun in its course from east to west, though the mature blossoms usually end up facing straight east. These versatile plants have an ancient history, beginning with Native American tribes across North America as early as 2000 BC. The seeds were used for their oil, ground up for meal, or simply eaten as a snack; the plant also provided dye and medicinal ointment. In 18th century Europe, sunflowers were widely used both in gardens and for making cooking oil; the production of this heart-healthy oil eventually became a major industry both in Europe and America. These are said to be the happiest of flowers, they symbolize loyalty and constancy.