Pattypan squash is a species of summer squash (Cucurbita pepo) notable for its small size, round and shallow shape, and scalloped edges, somewhat resembling a small toy top, or flying saucer.

The name “pattypan” derives from “a pan for baking a patty.” Its French name, pâtisson, derives from a Provençal word for a cake made in a scalloped mould.

Patty pan squash comes in yellow, green, and white varieties. The squash is most tender when relatively immature; it is generally served when it is no more than two to three inches in diameter. In fine cuisine, its tender flesh is sometimes scooped out and mixed with flavorings, such as garlic, prior to reinsertion; the scooped-out husk of a patty pan also is sometimes used as a decorative container for other foods. Pattypan is a good source of magnesium, niacin, and vitamins A and C. One cup contains approximately 20 to 30 calories and no fat. It is often sliced, coated and fried until golden brown, or simply boiled. In Polish cuisine, they are pickled in sweet vinegar. 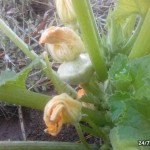 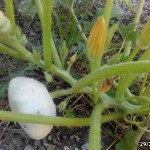 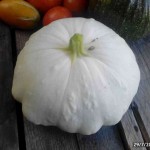 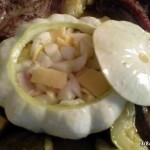